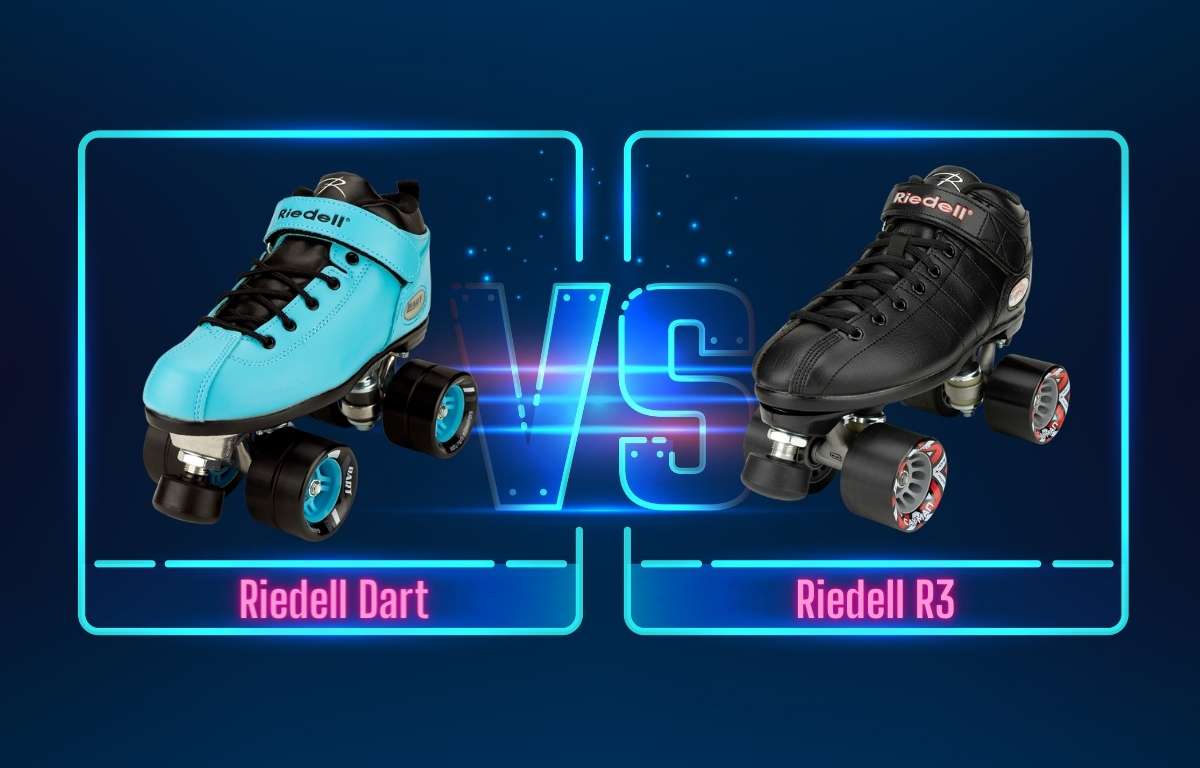 If you are just getting started in speed skating and are thinking about getting a new pair of Riedell skates, you have two main options: Riedell Dart Skates or Riedell’s R3. In this article, I will do a Riedell Dart vs R3 comparison and go over the similarities and the differences between these two skates so you can pick out your next roller skates with confidence.

In this analysis, I’m going to go over the different boots, plates, roller skate wheels and bearings that come on each model of roller skate. Then, I’ll give you a handy table that will compare and contrast these two skates. Finally, I’ll give you my pick on the best Riedell speed skates. Let’s go!

First on the list are the original Riedell Dart aqua and black skates. These beginner speed skates come in either black or aqua. They used to also come in purple, but those have been discontinued. The boots on these skates come in men’s size 1-14. So, it will fit both the little kids and you guys out there with giant feet (like me – size 13). These skates also have adjustable toe stops that secure into place with a lock nut.

The Riedell Dart comes with a heavier die-cast aluminum skate plate. It is a heavier skate because of this material in the skate plate, however, it does make these skates quite durable. It also comes with aluminum trucks and axles.

The wheels on these skates are a good size for speed skating at the roller rink coming in at 62mm tall and 43mm wide. Most quad speed skate wheels will have a diameter of 62mm. You also want a wider wheel to help with your pushes. They also come with exclusive matching color hubs so the boot color matches the hub color.

This wheel also has a 93A durometer which makes it fairly hard for indoor speed skating. These wheels will not work well outdoors on surfaces like asphalt, but should do fine on sports court or smooth concrete.

The Dart wheels are also a little on the soft side at the 93A durometer. I typically like speed wheels that are a little harder – in the 95A-98A range. However, these are decent enough wheels for those just starting out in speed skating. The softer wheel will give you more traction, which is more important than top speed, if you are just beginning.

Riedell R3 At a Glance

The only difference between the original Dart skates and the Dart Ombré are the boot colors. In the Ombré, you have two super cool designs that are sure to turn heads and get you constant attention. The first is a neon yellow with black fade that blends the two colors together. Or, if you want even more color, you can go with the pink and purple that fade together.

You have the same die-cast aluminum plates, Dart 93A wheels and the ABEC-5 bearings. The boot construction is even the same with a medium boot width. However, the neon yellow & black boot comes in men’s sizes 1-14 while the pink & purple boots come only in men’s sizes 1-9.

Riedell Dart Ombré At a Glance

The Pixel is the newest skate in the Riedell Dart family. It is very similar to the other Dart models with the boot being the only difference. This roller skate has the same wheels, bearings and die-cast aluminum plates. There are just a few differences.

First, you get two different color wheels. The front 2 wheels are red and the back two wheels are black. This goes really well with the new, stylish boot design that has a black base coating and then fades to white with a red, black and gray pixel pattern along the boot. They are very cool looking and definitely the only boot out right now with this kind of pattern on them.

Riedell Dart Pixel At a Glance

A Deep Dive into the Riedell R3

Next up, we have the heavily padded, hand crafted skates by Riedell – the R3. These skates are one of Riedell’s nicer boots for beginner speed skates. They come in men’s sizes 1-14 with a medium width. They also only come in black – no fancy colors here.

The biggest difference between this skate and the Dart models is the roller skate plates. The R3 comes instead with a lightweight PowerDyne Nylon plate. This is less durable than the Dart’s Die-Cast Aluminum plate but is also significantly lighter. A lighter skate does make for less leg fatigue when you’re skating 100s of laps in practice.

Like the Dart, these skates also come with an adjustable toe stop that is secured with a lock nut. They also come with the same ABEC-5 roller skate bearings.

Finally, the R3 comes with 62mm x 43mm Sonar Cayman wheels. These are a step up from the Dart wheels as these are a little harder – a 95A durometer. The slightly harder wheel on the R3 is better for keeping your top speed.

Riedell R3 At a Glance

A Detailed Comparison of the R3 and Dart Roller Skates

Now that we have looked at the Original Riedell Dart, the Dart Ombré, the Dart Pixel and the R3, lets do a deeper comparison of each one. Below is a chart that gives you the important specifications of each skate.

As you can see from the table above, all of the Riedell Dart skates are almost identical to each other. The only real difference is the color of the skate boots. All 3 Riedell Dart skates come in sizes 1-14, have die-cast aluminum plates and all come with the same 62mm x 43mm Dart 93A wheels. All 3 skates also come with the same adjustable toe stops and toe stop lock nut and have ABEC-5 bearings.

The R3 Skate vs. the Dart Skates

Which Riedell Speed Skates Should You Choose?

I personally would go with the Riedell R3. I think the boot is a little nicer and has a little more padding. I also don’t like die-cast aluminum plates because they are quite heavy. That may not be a big deal if you are just doing regular skating at the roller rink, but for speed skating, the weight of your skates does matter. You will get tired more quickly with a heavier skate.

Both the Riedell R3 and Dart skates can be used as entry level roller derby skates. However, they are definitely beginner roller skates for that sport and you’ll want to upgrade to a nicer pair of skates once you get more into the sport.

Can Riedell Dart or Riedell R3 be used as outdoor roller skates?

The Riedell Dart skate come with 93A durometer wheels. This is quite hard and will not do well on rough surfaces like asphalt. However, if you are roller skating on smooth concrete or sports court outdoors, then it will do just fine,. Typically, you want a nice, soft 78A set of outdoor roller skate wheels when skating on rough surfaces like asphalt.

The Dart and R3 skates come in men’s shoe sizes and fit pretty much true to shoe size. However, you should always consult the Riedell roller skate sizing charts before purchase and measure your feet to get a good idea of how well Riedell skates will fit you.

Can the Riedell Dart or R3 be used for jam skating?

Yes. Beginner jam skaters can use the Dart or R3 as a jam skate. You can easily remove the toe stops on these skates and install jam plugs instead. With that said, I’d really recommend VNLA instead of Riedell for jam skates.

Riedell is really well known for top of the line artistic, jam and derby skates. While they do offer speed skates, really the only two options are the R3 or the Dart – both of which are beginner speed skates. Hopefully the analysis above helps you with making a decision about which of these 4 skates are best for you. Now, grab your skates and start doing some laps!