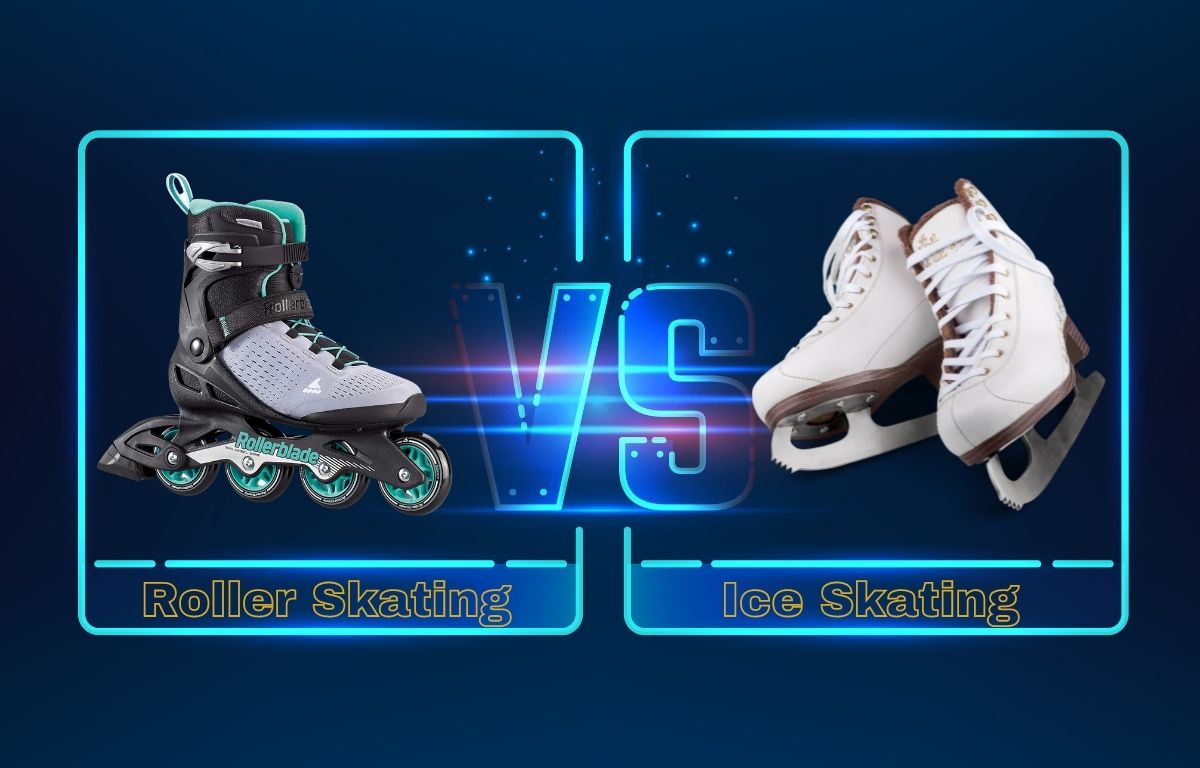 A Comparison of the Different Types of Skating

Skating is so much fun! Whether you are ice skating, inline skating or roller skating, all of these activities are both great fun and good cardio exercise, too. In this article, I am going to compare and contrast quad roller skating vs ice skating vs roller blading to help you decide which is best for you.

If you are a skating newb or you are really good at both these sports and just want to enter the debate, this article will go over the differences between quad roller skates, ices skates and inline skates (or rollerblades) and discuss the different skating surfaces, mechanics & techniques and the amazing health benefits of skating.

If you are are more interested in the differences between the different kinds of roller skates, please be sure to check out my article Rollerblades vs Roller Skates vs Inline Skates.

What is roller skating?

Roller skating is where skaters walk on wheeled shoes attached to their feet. Roller skating is the act of moving on roller skates. It can be done for transportation, recreation, or competitive purposes.

The history of roller skating starts way back in the 18th century. The roller skate was first “officially” introduced by John Joseph Merlin, a Belgian investor. Merlin is the first recorded inventor of the skate, even though it was documented that a pair of skates made their first public appearance in a London stage performance in 1747.

In 1863, James Plimpton of New York City made it his life goal to improve the roller skate design. Instead of adding more wheels, Plimpton used four—two in the front and two in the back. What we today would call the modern quad skate.

What is Ice Skating?

Ice skating is a fun activity that many people consider to be a part of winter. It’s similar to roller skating but it’s on ice instead of on smooth surfaces.

Ice skates have sharp blades attached to the bottom so gliding across the ice is easier. Ice skating also requires protective gear such as helmets, knee pads and elbow pads if you plan on doing tricks and staying upright.

The history of ice skating goes back hundreds of years. Evidence has been found that suggests that people have skated on frozen ponds for over a thousand years ago in the Netherlands. The first type of ice skate was made with bones, usually oxen or deer, and attached just below the ankle to keep one’s feet steady while skating.

Later, around the ninth century, there were “hose impedimentis”, which are shoes or cuffs worn above the shoe to provide more grip when walking across icy surfaces. There is also evidence of Mongolian horsemen wearing down their boots by sliding across ice on them while traveling.

Only in the fourteenth century do we find written reference to ice skating as such. At this time, skates were being made with a scooped metal blade fixed to the bottom of a boot.

Roller skates and rollerblades have built in brakes, whereas ice skates and aggressive inlines do not have this stopping device. However, there are many techniques I show in my article How to Stop on Roller Skates that can also be used when roller skating, rollerblading, inline skating or ice skating. These include the T-Stop, Plow Stop, Hockey Stop and more.

Both ice skating and roller skating involve balance. Maintaining balance on quad skates is easier than rollerblades or ice skates. Quad skates allow your weight to more easily be distributed over the two wheels in the front and back. Ice and rollerblading skates on the other hand have a single blade or set of wheels all in one line. This makes it harder to balance on.

Roller skating and ice skating both are similar when it comes to the actual gliding. Both roller and ice skaters push side to side to skate. Whether you are on a smooth ice surface or a nice wooden floor roller rink, all skaters balance, push and glide.

These two sports both are popular but in different ways. One major difference in popularity is that many ice skating sports are in the Olympics. Speed skating, ice hockey and figure skating are all done on ice skates and are very popular drawing thousands of people into those sports. Ice skating is also popular where it’s cold and a good icy surface can be found.

Roller skating is more popular recreationally in warmer climates where the weather is nice and you can skate outdoors or at a roller rink. Sadly though, there are no roller sports in the Olympics.

The health benefits for ice skating vs roller skating are pretty much the same. All skating is great for your heart, lungs and the rest of you cardiovascular system. It’s also great for all of your lower muscle groups – legs, butt, ankle strength. Plus, it’s so much more fun than running.

The objective of ice hockey is to score more goals than the opposing team by using a stick to shoot a puck into the opposing team’s net. This ice skating game is played on any good ice surface. Each team has six players on the ice at a time – one goalie whose sole job is to keep the other team from scoring and five additional players trying to both score goals and defend.

The objective to roller hockey is similar to ice hockey – score more goals than the other team. The only difference is that roller hockey is not played on ice surface but instead in roller rinks, parking lots or any smooth surface.

Roller Derby is an awesome, aggressive sport for those wanting to see skaters go fast, perform difficult moves and take a nasty fall or two hundred. This sport involves two teams who are jockeying to get their main skater to lap the other team on the floor. The more skaters the lead skater passes, the more points your team gets. Of course, the opposing team is trying to keep that from happening and it makes for some pretty awesome action and collisions. This sport is not for the faint of heart.

This type of ice skating is in the Olympics. Skaters wear figure skates to perform ice skating tricks such as jumps, spins and dance moves all while gliding on the ice. This type of ice skating requires years of practice and dedication to master. Figure skating also exists on the roller skating side, though it is nowhere near as popular as on ice skates. The two sports are similar but on different surfaces and using different types of skates.

Quad skates have a boot with a skate plate attached to it for a smooth roller skating ride. They have a built in brake and are perfect for those who want to start skating. The four wheels on the skate are side-by-side with two wheels in the front and two in the back for maximum stability.

Inlines and rollerblades are similar to ice skates in that they have a single blade attached to a skate plate that is then attached to the roller skate boot. The difference being that the blade is made out of 3-5 wheels vs. metal blades. Rollerblades and aggressive inlines also differ from each other in that Rollerblades have a high-top, hard shell boot with wider wheels that makes balance easier for beginner skaters. Aggressive speed skates have low-cut boots and tall wheels, whereas aggressive roller hockey skates have high-top boots and shorter stubby wheels.

Ice skates have boots with metal blades attached to the bottom. When ice skating, these metal blades glide on the ice nicely to allow the skater to move. The ice skate blades are a thin blade that are only a few inches in size. This thin blade underneath the boot can be hard to learn to balance on, but with enough practice, ice skating is a ton of fun.

Which skating is best for beginners?

Quad roller skating is the best for beginners.

Stability and balance are the most important things when you are first learning how to skate – no matter if it’s ice skating, roller skating or inline skating. Quad skates provide more stability because of their design. Each skate has four wheels with two wheels on the front and two on the back side-by-side to more evenly distribute your body weight across the skate. Many quad skate wheels can also be locked down to make them roll slower.

Go with a high top boot and soft outdoor wheels for the best stability. Some new skaters do prefer rollerblades over quads because most rollerblades come with an extra hard and firm boot for better stability. While still harder than quad roller skating, some skaters feel this extra firm boot is enough to give them the stability they need to choose inlines first.

Another upside of roller skating is that you can do it anywhere: skate parks, regular parks, a parking lot, your garage or basement or a fancy roller rink. You just have a lot more options to practice with roller skating.

However, if you have a frozen pond in your backyard and it snows 9 months out of the year, then I think ice skating is your best first choice. As with anything in life, practice makes perfect. Weekly practice is necessary to get good at any type of skating. Go with the skating option that is easiest for you to access regularly and stick with it.

Is it easier to roller blade or ice skate?

Rollerblading is easier because the wheels are wider than the ice skate blade. Rollerblades also have a firm, hard-shell boot that help with stability.

No. Quad roller skating is the easiest, followed by rollerblading and then ice skating.

Is roller skating hard if you can ice skate?

Does roller skating get easier?

With practice, roller skating does get a lot easier. If you are just starting out, it can take a few months of regular practice multiple times per week to get good at roller skating. If you are a beginner and you need more help, please be sure to check out my How to Roller Skate and How to Rollerblade articles. Both provide more information to help you get started. Also, be sure to sign up to the Roller Skate Dad Club. In my Club emails, I send out tips and tricks that help beginner skaters. It’s free to join.